Carving it up on the Ice – Jackson Fontaine

Jackson has been involved in ice hockey throughout his time at Christchurch Boys’ and was the captain of the combined CBHS/STAC team this year. This team completed the regular season ranked first in the four-team Canterbury competition above Burnside HS, Cashmere HS and Alliance (Shirley BHS and Papanui HS), with Jackson scoring 19 points in seven games, with eight goals and seven assists. 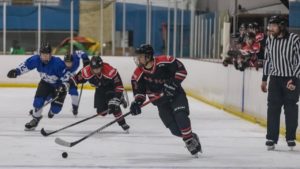 Outside of the school competition, Jackson is the youngest player in the Canterbury Red Devils side. This is a senior men’s side that plays in the NZIHL, the highest level of ice hockey in New Zealand. After the regular season, the “Devils” were placed third in the league. They then went onto playoffs, first against Admirals from Auckland and then against Stampede from Queenstown, unfortunately bowing out of that competition after last week’s semi-finals.

Well done with your ice hockey success Jackson and good luck for this weekend’s Chess Nationals which will be held at Christchurch Boys’ High.