Eli Leifi stole the show early. Buoyed by a huge crowd watching the senior high jump, he unbelievably reached the 2m barrier for the first time. To make this doubly impressive it is the first time any athlete has jumped 2m in the history of the Christchurch Boys’ High Athletics Day. Eli would go on and claim two further titles on the day, with a winning jump of 6.10m in the long jump and a winning time of 23.80 in the Senior Boys’ 200m.

Levi Murdoch took his turn in the intermediate high jump. Following on from a Junior record in 2020, Levi achieved a new record of 1.91m in winning the intermediate high jump, in the process, erasing Eli’s old record in this age group. Levi would also be pleased with his fine form in the long jump, his winning jump of 6.24m his best for the year and indicating he is running into form at the right time for this discipline also.

James Moore jumped 1.83m to win the junior high jump, surpassing Levi Murdochs record set in 2020. It was then onto the Shot-Put and with a first throw of 14.31m, James took another record, this time a mark that had stood since 1990. He then narrowly missed the record of 44.81m in the Discus set by Black Cap Cory Anderson back in 2005, before completing a 4th victory for the day in taking out the Long Jump with a winning distance of 5.38m. 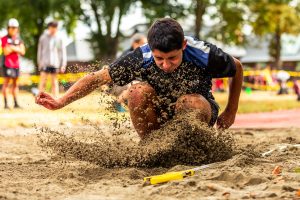 There was one further record on the day, this time in the intermediate boys 100m, where Luca Tracey eventually prevailed after a stern battle with Asher Pettengell-Brand, in the process setting a new record of 11.15. It is great to have Luca back in the sprint ranks for the upcoming Canterbury Secondary Schools Champs.

It was great to see a huge turnout of the boys that will represent us at the Canterbury Champs next week. In the Under 14’s, Harry Williamson – 100m, Zack Walton – 400m and Cooper Wightman 800m and 1500m all stood out, contesting a number of events.

In the Under 15’s Ollie Singleton was the track star, nailing victories in the 100m, 200m and 400m, coming off the back of a good summer of club competition. Sacha Tahi was the 800m winner on Wednesday, while Josh Tonga was a new name that made a real impact today, following up a second in the 400m, with a convincing win in the 1500m.

In the Intermediate grade, honours were evenly spread, with Keegan Richardson-Kegan Richardson-miller winning the 200m, Quin Mitchell the 400m and Luke Johnston the 1500m. Jack Busch-Ward was an impressive winner of the Discus with a big throw of 43.80m, just outside a long-time record.

In the Senior Boys’ our superstar sprinter Will Chunn dealt to a handy field in the 100m final posting a time of 11 seconds flat in the process. It was great to see Xavier Wehi back competing and doing really well. Narrowly beaten by Eli in the 200m final, he had earlier been a convincing winner in the 400m final in a really good time of 52.83m. Max Ansell put in a dominant display in a big win in the Shot Put, throwing 13.90m, while our head boy Henry Allott backed up his 800m win on Wednesday 9th March with a convincing win in the 1500m.

Back on the schedule by popular demand in 2021 was the U16 and U18 cricket ball throw. There was plenty of discussion leading into the event if the 100m mark would be broken. The boys got close but the 100m peg remains intact for another year. Congratulations to U18 winner Sam Harris (87.14m) and U16 winner Toby Robinson (79.65m).