The CBHS (Christine Todd Memorial) Athletics Championships were held at Nga Puna Wai on Thursday 10th March. COVID unfortunately had a massive impact with only 70 of the 110 boys who had registered to compete able to do so.

While it was a shame some of our top athletes were missing due to Covid, the Senior grade still proved keenly contested. Top jumper Levi Murdoch won the Long Jump and High Jump as expected, but also showed his sprinting prowess with a good win in the Senior Boys’ 100m in 11.72. There were doubles to Jacob Hawkins – 400m and Hurdles and Jack Busch-Ward – Shot Put and Discus.  Senior Results

The Intermediate grade was strongly contested today and produced some really good results. This grade produced the impressive individual result of the meet, with  James Moore taking away five titles, winning the High Jump, Long Jump, Hurdles, Shot Put and Discus. There were also doubles to Ollie Singleton – 200m and Javelin and Josh Tonga 100m and 400m.

Pictured – Will Saunders discusses his 1500m win with the Media Team 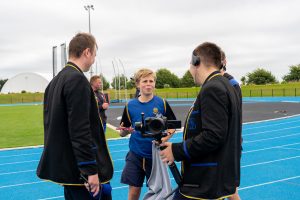 James was also able to break two records – Shot Put 15.12m, breaking a record that had stood since 1975 and Discus 48.87m. Both of these are fantastic results and outline James’ potential as one of this country’s best throwers. Intermediate Results

Some great competition in the Juniors, with Coooper Wightman – 800m, 1500m and 3000m and Hunter Scott 100m, 200m and High Jump each taking three titles. There were doubles also to Harry Williamson – Long Jump and Hurdles (new school record) and Jordan Bately – Shot Put and Javelin. A significant record also for Cooper in the 1500m, his time of 4.22, taking ten seconds off the previous record that had stood for 40 years. Junior Results

Some good results from our Under 14 Athletes. Title doubles to Henry Sevier -1500m and Hurdles, Caleb Collins-Polata – Shot Put and Discus and Ethan Duke-Norris – Long Jump and High Jump. U14 Results