On Monday Gold Blazer Awards were presented in assembly. To qualify for a Gold Blazer the boys must display exceptional merit at the highest school boy level (this is usually selection in a New Zealand Secondary Schools team or at U18, U19 and U20 level) and their sportsmanship and general character and conduct must be beyond reproach.

COVID has impacted the number of opportunities for the boys to qualify for a Gold Blazer this year.

Following on from his 2019 successes Jamie had another standout year for this years 1st XV. As 1st XV co-captain Jamie lead the 1st XV to the UC Championship final and was selected for the Crusader Knights. Following his Knights selection Jamie was selected for the NZ Secondary Schools Barbarians. Jamies selection, his outstanding sportsmanship and conduct is recognised by the presentation of a GOLD Blazer Award for Rugby

Griffin has been Trap-Shooting for CBHS for his four years while attending school. After many successes over the last three years this year he was presented with the Craft Wright trophy as the winner of the Canterbury Secondary School Down The Line circuit.

In early March he competed at the NZ Down The Line Championship event held at Christchurch. Griffin was the top qualifier in the NZ Points Score event with 150/150 meaning he qualified as the number one shooter. Griffin was subsequently selected for the NZ Open Mens team. This is a significant achievement and demonstrates the calibre of Griifin in his chosen sport. To be selected in a senior mens NZ team while still at school is an outstanding achievement.

Fabians contribution to CBHS over the last two years has been immense. With little rugby experience when he arrived from the Netherlands in 2019 as part of the CBHS International programme Fabian soon impressed with his work ethic and all-round ability. Fabian was selected for the Crusader Knights in 2019 and this year took the next step to NZ Secondary Schools level.

Fabian has just signed with the Highlanders to be part of their academy in Dunedin.

Ollie Curtis has had an outstanding year of rugby at CBHS this year and was an integral part of the 1st XV’s UC Championship campaign. His goal kicking has been a significant factor in the results that they achieved this season.

As a result of his performances this year Ollie was selected for the Crusader Knights and then for the NZ Secondary Schools Barbarians.

Ollie is also an outstanding cricketer and has represented the 1st XI since Year 11.

Ollies selection for NZ schools, his outstanding sportsmanship and conduct is recognised by the presentation of a GOLD Blazer Award for Rugby 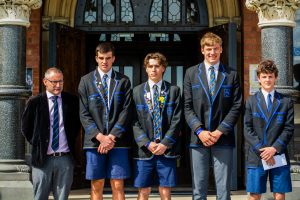