The 2022 Maadi Cup for secondary schools rowing concluded on Saturday down in Twizel. The squad had an incredibly successful regatta finishing with the boys competing in 8 A-Finals and 2 B-Finals.

A full list of results can be seen here:

Highlights from the week were a bronze medal in the U18 coxless pairs and U18 coxed four; the U16 coxed four and U17 coxless pair won silver medals.

CBHS contested the 2022 Maadi Cup in the U18 boys eight against Hamilton BHS, Christs College 1, Cashmere, Mount Albert Grammar, Christs College 2, St Andrews and Westlake BHS. In a fantastic final race of the regatta the eight claimed a bronze medal behind Christ 1 and Hamilton BHS. The boys can be incredibly proud of their efforts, and a great way to finish off the season. 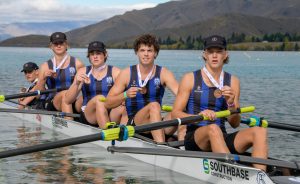