Hiro Fuchigami is a year ten student and has packed a lot of sporting success into his first two years at Christchurch Boys’. A talented junior rugby player at school, Hiro has quickly proven his talent as a touch rugby player also, already gaining selection in the senior team. However, it is in Softball that he has gained New Zealand selection. 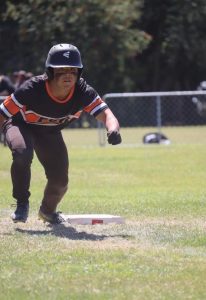 Invited to a Development Boys Sox Camp over the school holidays at Scots College in Wellington, Hiro is one of five Canterbury players selected in a New Zealand Development Sox Under 15 Boys team. The team will compete in the Queensland Under 16 State Championships in September.

Hiro started playing Softball when he was just four years old, following in the footsteps of dad Yoshi, a former baseball player. He plays for the PCU club in Christchurch and has gained rep selection for Canterbury twice previously. He plays Catcher and also as a Third Baseman.

Hiro describes the opportunities that he gets, as well as the technical side of the game as two things that really appeal to him about Softball.

Before he heads away to Australia with Softball, Hiro has some unfinished business with his Boys’ High Under 15 Rugby team. Unbeaten over the last two seasons – Under 14A and Under 15A – the Under 15A team look well placed to take out the Metro Under 15 title this year, if they can ever get back onto a rugby field. Hiro is one of the key players for this team, equally comfortable at either Second Five, or First Five.

A particularly likeable young man, Hiro has taken advantage of the many opportunities that Boys’ High offers. We wish him all the best with some great challenges ahead over the next couple of months.