CBHS’ Charlie Bridger (Yr9) competed over the weekend at the Sir Peter Blake Regatta held at Torbay Sailing Club Auckland.  This is a significant national two day regatta that every year receives entries from up in the Bay of Islands to down in Dunedin, and even some from overseas. The regatta is open to most youth centreboard classes including Optimist Green Fleet (first two years of racing), Optimist Open, O’Pen Skiff, P Class, Starling, ILCA 4, ILCA 6, RS Feva, 29er 420, Nacra 15, iQFOiL and Wing Foil classes. It is the largest centre board regatta in the Southern Hemisphere.

Five races were held over 2 days with 65 competitors in the Optimist class. 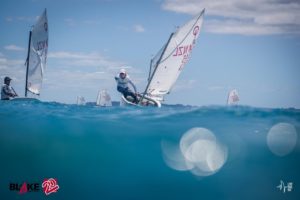